How Many Children Do The (1st Quorum) Seventy Have? A Statistical Exercise

Update: I’ve provided an updated analysis of the number of children of the Seventy. Read it here.

This post is a follow-up post to my previous statistical analysis of the number of children of the living Apostles. At the time the post was hosted on Blogger; here’s the link at Blogspot as featured by the Mormon Times on April 9, 2010. Much of the information for this post comes from the Church News site with any missing information (the biographical info about the General Authorities is only current to 2008 at that site) coming directly from Ensign biographies of the new general authorities (e.g., this link) or Wikipedia (with verification from church sources).

In order to start breaking down these data I think it is important to investigate some basic information about the numbers. First, the range of children is 1-12, meaning the fewest number of children is 1 and the most is 12. The total number of children of the 69 members of the Presidency of the Seventy and First Quorum of the Seventy is 360. This gives a mean number of children as 5.22 with a median value of 5 and a mode (most common number) of 5. Because all these values are basically the same, it is a good indicator that the distribution of the data is roughly normal. A quick calculation of the skewness and kurtosis reveals that this is the case: skewness = 0.69, kurtosis = 1.99. While the data are slightly leptokurtic, they are “normal” enough to warrant further analyses.

First, here is a graphical presentation of these raw data (click on the image to view full-size; warning, it has large dimensions). The bar graph has the longest serving Seventy at the bottom (Seventy who were sustained at the same time are then sorted by age): 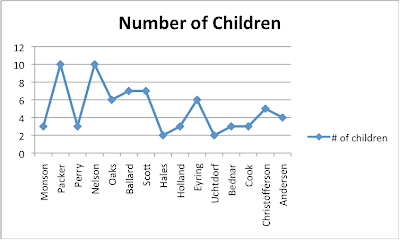 For the Seventy, there does not seem to be a trend when sorted by seniority but what if we sort the Seventy by their current age and graph the number of children they have?

There appear to be about three outliers (two Seventy with 1 child and one with 12 children). However, without running a formal “outlier analysis” of these, I cannot say for certain whether or not they are statistically significant outliers. In any case, I will include them in the analyses because I have sampled the entire population of living, non-emeritus members of the First Quorum of the Seventy (and Presidency of the Seventy, who were all members of the First Quorum of Seventy before their calls to the Presidency) so removing a few Seventy (nearly 5% of the sample) just because they might be outliers would be misleading about the distribution of the actual population.

Now back to the bar graph of the number of children of the Seventy when the Seventy are sorted by age. Now it looks like there might be a difference in the number of children between the oldest and youngest Seventies. When I correlated year born with year called as a member of the First Quorum of the Seventy, there was – no surprise – a significant correlation (r = 0.652, p<.001). Because there is not a perfect correlation, the change to sorting by age rather than seniority seemed to make a qualitative difference. Now is there a quantitative difference in number of children between the oldest and youngest Seventies?

Let me present a result that partially answers the question of if there is a difference in the numer of children based on age. Here is a scatter plot of the number of children by age of the Seventy:

Notice the slight upward trend (older Seventies tend to have more children). It is only an R^2 of 0.07 though (age of the Seventy explains only 7% of the variance in the number of children), which is not a large value. Is this a significant trend? Yes (r = 0.27, p = 0.03; N = 69). However, let me remove the outliers (Elders Renlund and K. Johnson with 1 child each and Elder Watson with 12 children) just for the sake of completeness (they really should not be counted as outliers but bear with me). Here is the scatter plot (note: the scale has changed):

The R^2 value (variance) increased slightly. Now if I rerun the correlation (with N = 66) we receive an r = 0.31, p = 0.01. Removing the outliers improved the trend! I’ll keep all Seventy in all further analyses though. In either case, it appears that younger Seventies tend to have fewer children than older Seventies have.

Now I’ll create two groups using a median current age split. The median current age is 58 years old. With this split there are 35 Seventies in the younger group and 34 in the older group. Running an independent samples t-test yields a non-significant but trending result (mean of younger group = 4.83, mean of older group = 5.62; t=-1.821, p = 0.07). Again, age seems to be a factor in the number of children that the Seventies have. When correlating number of children with how many years the Seventies have been a member of the First Quorum of the Seventy, there is a nonsignificant result (r = 0.04, p = 0.76). Therefore we can with some certainty rule out seniority.

What do all these results mean, other than I am a bit of a statistics geek? We could surmise that the number of children that the General Authorities have seems to parallel the decreasing numbers seen worldwide, albeit very slowly. However, the average number of children of the current members of the First Quorum of the Seventy is 5, which is considerably higher than rates seen at present worldwide (although, that is not an entirely fair comparison because all/most of the Seventies are done having children – I’m just making an educated guess about that – so they are of a different generation than the current one(s) having children). However, members of the younger group of Seventy still have nearly 5 children on average. Are you convinced of age explaining the number of children?

What about whether or not the Seventy were born in the United States of America? 40 of the 69 Seventy (58%) were born in the U.S. and 29 (42%) were not born in the U.S. I was surprised at how many of the Seventy are from different countries but it was a trend I noticed as the names of new General Authorities have been read in General Conference over the past few years. We are part of a growing worldwide church that has members in nearly all of the 200 or so nations of the world. When I correlated the number of children with my born in the U.S. or not variable, there was a significant result with the U.S. born Seventies having more children than those not born in the U.S. (r = -0.39, p = 0.001). An independent samples t-test confirms this result (mean of U.S. born = 5.83, mean of foreign born = 4.38; t = 3.50, p = 0.001). This result is still significant if I remove the 3 outliers (t = 3.79, p < 0.001). So is it age or place of birth?

Here is a similar bar graph to ones presented before before but grouped by country of origin (U.S. / non-U.S.) and sorted by age (youngest to oldest). Notice any trends?

First, I wonder if there is a link between birthplace and age. Maybe the youngest Seventies are more likely to not be born in the U.S. and that explains the results. Running a quick t-test yields the following result: mean of U.S. born = 60.20, mean of non-U.S. born = 57.10; p = 0.06. It appears there is a trend for the foreign born Seventy to be younger than their U.S. counterparts. Now, I will covary out where the Seventies were born in age and number of children analyses. A partial correlation (current age by number of children, controlling for place of birth) negates the significance of the results (r = 0.20, p = 0.11). An ANOVA (age by children) with place of birth as the covariate is also not significant (df = 23; F = 1.17, p = 0.32). This leaves the picture a bit hazy now. The number of children is not necessarily related to age, although it seems to be partially age-related, but it is not entirely explained by country of birth either (that only accounts for a proportion of total variance in number of children; plus, the foreign born Seventy tend to be younger than the U.S. born Seventy so place of birth results might be muddied by age differences). The number of children seems to be explained better by country of birth than age though.

I’ll do an additional analysis to try and verify this. Looking at just the U.S. born Seventies, there is no longer a relationship between age and the number of children (r = 0.11, p = 0.49). This is also the case for the foreign born Seventies (r = -0.09, p = 0.64). This means that within the two place of birth groups, age does not appear to be a significant factor in the number of children.

I hope you enjoyed this analysis. Let me know of any errors you might see or if you have any requests for further analyses. Please feel free to leave a comment and offer any opinions you might have.