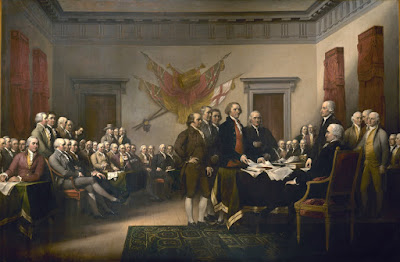 When in the Course of human events, it becomes necessary for one people to dissolve the political bands which have connected them with another, and to assume among the powers of the earth, the separate and equal station to which the Laws of Nature and of Nature’s God entitle them, a decent respect to the opinions of mankind requires that they should declare the causes which impel them to the separation.

We hold these truths to be self-evident, that all men are created equal, that they are endowed by their Creator with certain unalienable Rights, that among these are Life, Liberty and the pursuit of Happiness. That to secure these rights, Governments are instituted among Men, deriving their just powers from the consent of the governed, That whenever any Form of Government becomes destructive of these ends, it is the Right of the People to alter or to abolish it, and to institute new Government, laying its foundation on such principles and organizing its powers in such form, as to them shall seem most likely to effect their Safety and Happiness. Prudence, indeed, will dictate that Governments long established should not be changed for light and transient causes; and accordingly all experience hath shewn, that mankind are more disposed to suffer, while evils are sufferable, than to right themselves by abolishing the forms to which they are accustomed. But when a long train of abuses and usurpations, pursuing invariably the same Object evinces a design to reduce them under absolute Despotism, it is their right, it is their duty, to throw off such Government, and to provide new Guards for their future security.

The seeds of independence were sown many years before 1776. Those seeds were the desire for liberty and freedom (and maybe a touch of rebelliousness!). When the Puritans came to America they brought with them and further developed their ideas of liberty. They typically viewed liberty in four different ways. The first and the main form of liberty of which they spoke and wrote was a collective or “publick liberty” (Fischer, p.200). This was a liberty of the community and colony and not necessarily individual liberty. It “was thought to be consistent with close restraints upon individuals” (Fischer, p.200). It was through individual restraints that the entire community had liberty. This may seem counter-intuitive but it is not possible to have liberty for the collective without restraining the individual, which is one reason why anarchy does not work. Without restraint, entropy takes over, leaving only chaos.

The third Puritan view of liberty was the sense of “soul” or “Christian” liberty – the “freedom to serve God in the world. It was freedom to order one’s own acts in a godly way – but not in any other. It made Christian freedom into a form of obligation” (Fischer, p.202). This type of liberty was also referred to as liberty of conscience, again which is the liberty to act in a godly manner. While this idea of liberty was restrictive in practice (they believed in “freedom for the true faith [Puritanism]” but no other; Fischer, p.203), it was an important founding philosophy for the United States – that people should be free to act godly (and I’ll add, in whatever manner they see fit).

The fourth view of liberty for the Puritans was an individual liberty, a liberty or freedom from tyranny. This freedom included “freedom from want in the most fundamental sense” and “freedom from fear” (Fischer, p.205). This was similar to how many Americans view liberty today, although it is still not the same as modern libertarianism. This Puritan belief was another important belief that would influence many of the future Founding Fathers.

The Puritans believed in the freedom in order and not the freedom from order (i.e., collective liberty was more important than personal liberty). They believed that individual restraints were vital to the welfare of society – an idea that sometimes seems largely lost in our world today. This does not mean that more laws or more restrictions make you free but it also does not mean that fewer laws and fewer restrictions make you more free.

Liberty and freedom are God’s desires for us. He endowed us with “certain unalienable Rights,” which rights include life, liberty, and the pursuit of happiness. Liberty is a gift from God! We should always remember and serve Him, who gives us our freedom. I pray we may be like the great Book of Mormon military leader Moroni who “did joy in the liberty and the freedom of his country, and his brethren from bondage and slavery” (Alma 48:11). It is Satan who “seeketh to overthrow the freedom of all lands, nations, and countries” (Ether 8:25), whereas God desires freedom and joy for us.

God told His people: “I, the Lord God, make you free, therefore ye are free indeed; and the law also maketh you free. Nevertheless, when the wicked rule the people mourn. Wherefore, honest men and wise men should be sought for diligently, and good men and wise men ye should observe to uphold; otherwise whatsoever is less than these cometh of evil” (D&C 98:8-10). I pray we may follow this counsel and elect wise and good leaders to political positions, which unfortunately does not always seem to be the case with us. However, it is never too late! As we remember and return to that God who gives us life and liberty, we will be blessed individually, as a nation, and as a world!

Here is a great video showing what liberty means to people in our day.