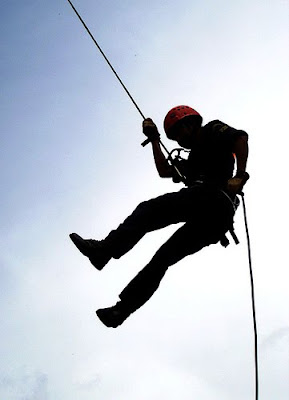 As I was growing up, my family went rappelling fairly often. My father had spent a lot of time climbing when younger and had developed a great love of rappelling. It was not long after I first tried it that I loved it. I remember the first time I went rappelling. I was about 8 years old. The rock we went down was not large – maybe 20 feet tall – but to an eight year old, it was daunting. I was able to make it down under the reassurances of my father and family. It wasn’t long before I went down without hesitation. There is something thrilling about bouncing down a cliff at a high speed. There were times that I would jump down 20-30 feet in a single bound, relying on the friction between the rope, my hand (when I planned on going down that quickly I wore a leather glove), and the figure-8 (a metal device that the rope slides around) to keep me from falling to quickly. I even tried going down head-first, which is not recommended if you have a serious fear of heights. [Image by Rescue Dog].

Rappelling is a dangerous activity. Yet, if proper safety measures are taken, it can be quite safe. When we went rappelling, my father made sure we were safe. Whenever possible, he would tie the rope(s) to two anchor points so that if one failed, there would be backup. We used to tie our own harnesses using nylon straps but we preferred to use manufactured harnesses. All harnesses were checked and re-checked to make sure they were on properly. We would use two carabiners to connect to the figure-8 (that the rope went around). These carabiners were set so the gates were on opposite sides. Whenever possible we would use at least one carabiner with a locking gate. As an added measure of safety, we would have someone at the bottom of the cliff who belayed. Belaying is a climbing term to describe the controlling of a rope. If someone were to slip down the cliff out of control, the person belaying at the bottom could pull the rope out away from the cliff and stop the person on the rope. They can also help guide the person rappelling down the cliff. Rappelling is safest when there is a person at the top guiding the person on their journey down the rope as well as someone belaying at the bottom.

Over time rappelling ropes wear thin. The tough outer layer of the rope can weaken with the friction of the people going down the rope as well as when it rubs against the rocks. Rappelling ropes are incredibly strong – they can hold thousands of pounds of weight and force. However, they become unsafe if their integrity is compromised.

As is rappelling, so is life. Life can be and is very dangerous but it can be a lot of fun. However, to survive – physically and spiritually – we need to establish safety guidelines and procedures. We need to establish them early and follow them. Others can guide us and help us remain safe as well. We have parents and prophets who can teach us correct principles. We can have safety in our personal lives, our homes, and within the gospel of Jesus Christ. We can find safety within Zion, the spiritual place where the pure in heart dwell and the physical city where the saints of God will eventually live.

“And it shall be called the New Jerusalem, a land of peace, a city of refuge, a place of safety for the saints of the Most High God; And the glory of the Lord shall be there, and the terror of the Lord also shall be there, insomuch that the wicked will not come unto it, and it shall be called Zion. And it shall come to pass among the wicked, that every man that will not take his sword against his neighbor must needs flee unto Zion for safety.” (D&C 45: 66-68).

As we anchor ourselves to the rock of Christ and follow the prophets and scriptures as our safety guides, we will be safe even as we experience some of the harrowing heights and even the thrills of life.